One of Kandinsky's most notable forms are his curved lines. For me they express a whimsy and gestural quality that detracts from what would otherwise be considered a rigid rule-based plotting system. In Dominant Curve, 1936 (below) we can see one of these signature curved lines move from the top right to the bottom middle of the canvas. This line holds incredible detail and variation. Computer drawing software like Adobe Illustrator only added details like varying stroke-width in the last 5 years. 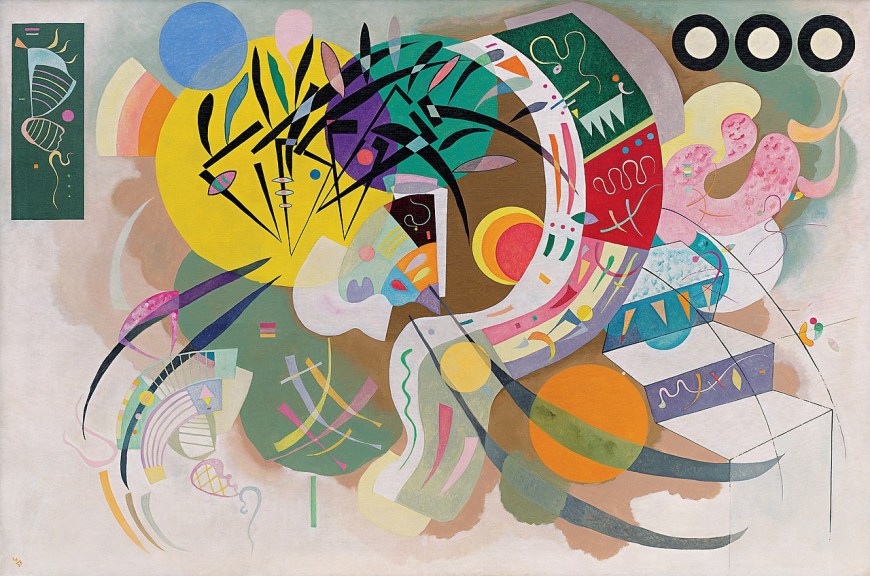 For Kandinsky, there is a preceding set of rules in order to build a curve like this. For my first contemplation on Kandinsky's style, I'd like to look into this a bit deeper. This preceding concept is known as the Complex Angular Line. It has two basic forms: zig-zag and wave-like. The combination of these along with further displacement and varying stroke-width create the type of free-wave line seen in Yellow Red Blue. Let's take a look at what the artist considers a complex angular line.

Complex Angular Lines: The simplest forms of lines can become complex when other lines join the original one. In this case, the point receives not two, but rather, several pushes which (for simplicity's sake) are derived from two alternating forces. The schematic type of these lines of many angles is composed of several segments of equal length which stand at right angles to each other. Accordingly, the endless series of many-angled lines becomes modified in two directions:

Thus a many-angled line can be composed of the most diverse parts — from the simpler to the ever more complex.[2]

In my contemplation below I took this description and codified it. Every time you draw a line, it is subdivided into a random number of points. Those points are then equally spaced out and then projected perpendicular to the drawn line at a random distance. This creates the sense of "several pushes derived from two alternating forces".

Click and drag with your mouse or touch-screen in order to plot the distance of either a zig-zag or wave-like line. This lightweight web application will display the rest.[3]